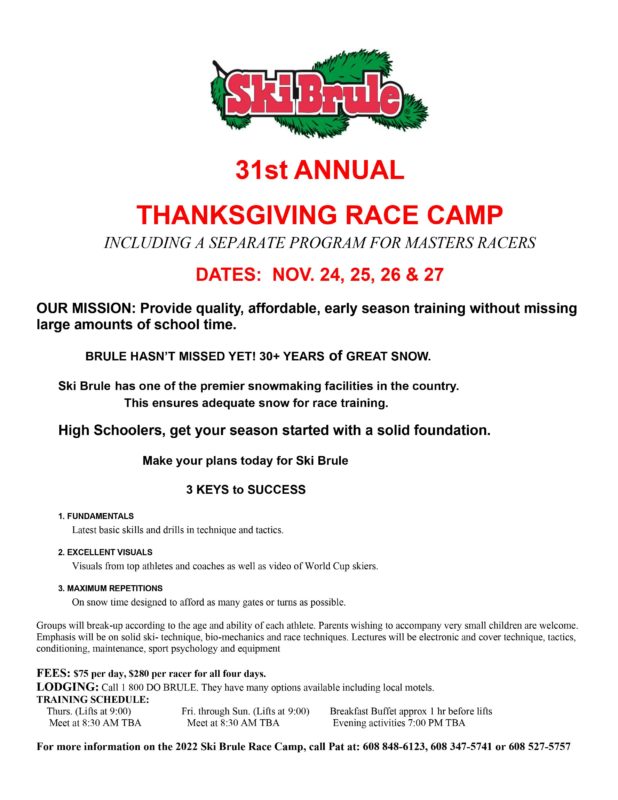 Ski Brule has one of the premier snowmaking facilities in the country.
This ensures adequate snow for race training.
High Schoolers, get your season started with a solid foundation.
Make your plans today for Ski Brule

3 KEYS to SUCCESS
1. FUNDAMENTALS
Latest basic skills and drills in technique and tactics.
2. EXCELLENT VISUALS
Visuals from top athletes and coaches as well as video of World Cup skiers.
3. MAXIMUM REPETITIONS
On snow time designed to afford as many gates or turns as possible.

Groups will break-up according to the age and ability of each athlete. Parents wishing to accompany very small children are welcome.
Emphasis will be on solid ski- technique, bio-mechanics and race techniques. Lectures will be electronic and cover technique, tactics, conditioning, maintenance, sport psychology and equipment

Pat Slattery: Head Coach
Pat is a Level 400 Coach and Central Junior Olympic Team coach. He was Head Coach of the Madison Alpine Race Team and is a PSIA Level III instructor. Pat has over 40 years coaching at Mt Hood and Blackcomb summer camps, Wilmot and MAD Alpine. He is currently coaching with Blackhawk Ski Club.
He was asst. US coach at the 32nd Trofeo Topolino Games in 1992 and acting Swiss team captain.
On Christmas Day 2021 Pat celebrated 70 years on skis.

Jenny Dahlberg: Associate Coach, Blackhawk
Jenny has been head coach of Blackhawk Alpine Race Team since it began in 2005. She is a Level 100 with course setting credits. She is a former UW racer and raced USSA for Team Duluth.
Jenny won’t be with us this year due to the birth of her twin boys Jacob and Michael.

Dennis Novak
Dennis is a Level 100 coach with our adult racers since the early years. Dennis is a top Masters racer and a frequent visitor to the NASTAR Nationals podium.

Sarah Breckenridge
Sarah is a former Cascade and MART racer who, in addition to coaching for MART coached at Eldora, Team Summit and Team Breckenridge in Colorado. She runs the Breckenridge School of Highland Dance in Madison.

Brad Gabrielese
Brad is a former Madison Alpine Race Team athlete and coach. Brad is head coach for Cascade this season. He returns with his family as a Brule Camp coach after several years.

MaryLu Cianciolo
MaryLu is a PSIA Examiner, she is Ski School Director at Chicago Snow Studio and was the lead Mighty Mite coach at Wilmot for over 10 seasons.